Correction wording flood risks for the Netherlands in IPCC report

The Netherlands is sensitive to climate change. Sea level rise as well as peak river discharges require precautionary measures. The incorrect wording in the IPCC report does not affect this conclusion.

Research continuously improves the insights with respect to possible flooding scenarios in specific areas (e.g. the project ‘Mapping safety in the Netherlands’ (Veiligheid Nederland in Kaart), www.projectvnk.nl). On this subject, the Netherlands Environmental Assessment Agency very recently published a study on flood-risk zones within the Netherlands’ (Overstromingsrisicozonering in Nederland).

The map shows the areas within the Netherlands that lie below Amsterdam Ordnance Datum (NAP), as well as the areas that are susceptible to flooding. Based on the current contour map and spatial planning of the Netherlands, we can state that: 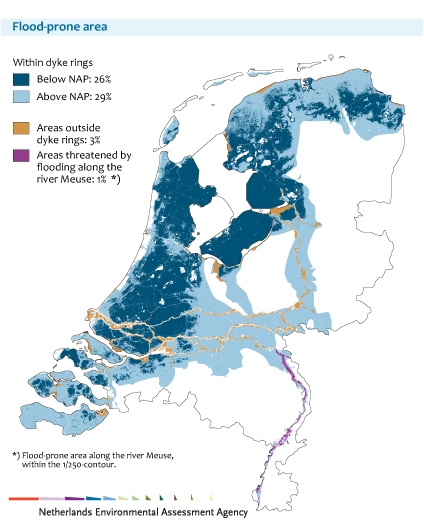 The risk of flooding is not equally divided over the flood-prone areas. The way a flood occurs in actual practice, depends on local circumstances and is largely determined by differences in height within a certain area, and for instance the presence of secondary dykes, construction of roads, and railway lines. Through further research on possible flooding scenarios in specific areas, insights into the risks of flooding are increasingly gained. In the study ‘The Netherlands in the Future’ (MNP, 2007), regional differences between flooding scenarios have already been included in, for example, calculations of economic damages and human casualties. On this subject, the Netherlands Environmental Assessment Agency very recently published a study on flood-risk zones within the Netherlands.