Navigate to main content Navigate to main menu
You are here
Home / Topics / Energy and Climate Change / News / 2016 / Cutting Europe’s meat and dairy intake is beneficial for human health, the environment and climate

Cutting Europe’s meat and dairy intake is beneficial for human health, the environment and climate

The current European diet is characterised by a high intake of meat, dairy products and eggs, leading to an intake of saturated fat and red meat that exceeds health recommendations. Livestock production in the EU is the driver of around 80% of the nitrogen losses from agriculture. These losses cause a number of environmental problems, including eutrophication. Halving the current consumption of meat and dairy in the EU would not only have considerable health benefits but also achieve reductions of around 40% in agricultural nitrogen losses and 25% to 40% in greenhouse gas emissions from agriculture.

These are some of the conclusions of the report 'Nitrogen on the Table - The impact of food choices on nitrogen emissions and the European environment'. This special report of the European Nitrogen Assessment was prepared by an international group of researchers led by PBL Netherlands Environmental Assessment Agency.

Around 80% of the total emissions of ammonia, nitrate and of nitrous oxide – a powerful greenhouse gas –  from EU agriculture are related to livestock production. This includes the emissions from feed production (e.g. cereal and fodder crops).

There are large differences between food commodities in terms of nitrogen losses per unit of protein produced. Production of plant-based foods, such as cereals, involve relatively small losses, whereas the losses in livestock production are much greater. Nitrogen losses per unit of food protein from beef are more than 25 times those from cereals. For pig and poultry meat, eggs and dairy, the losses are 3.5 to 8 times those from cereals.

The report evaluates the effect of a 25% to 50% reduction in the intake of meat and dairy on human health and the European environment. Reducing the consumption of meat and dairy would lead to food consumption patterns that are better aligned with international dietary recommendations. This would lead to a lower prevalence of cardiovascular diseases and colorectal cancer.

All of the reduction scenarios lead to a reduced intake of saturated fats, the main source of which are animal products. Only the most radical change – a 50% reduction in all meat and dairy consumption –  would bring average intake levels of saturated fats within the range recommended by the World Health Organization (WHO). The same scenario is also the only one in which the average intake of red meat is reduced to only slightly above the maximum recommended by the World Cancer Research Fund (WCRF).

Less consumption of meat and dairy, followed by a proportional reduction in EU livestock production would lead to smaller nitrogen losses, as well as to lower greenhouse gas emission levels and to less land being used per EU citizen. In case of a 50% reduction in all meat and dairy, nitrogen losses would be around 40% less. In particular, ammonia emissions would be reduced, as these are highly related to livestock production, whereas both livestock and arable field-based activities contribute large amounts of nitrous oxide and nitrate emissions. Greenhouse gas emissions from agriculture are projected to be reduced by 25% to 40%. Depending on the scenario, energy production in the form of bioenergy crops could be increased considerably.

Effects on the farming sector

These diet-led changes in food production patterns would have a large economic impact on livestock farmers and associated supply-chain actors, such as the feed industry and meat-processing sector.

The EU Common Agricultural Policy could help to transform the current agricultural system into one that sustains healthier dietary choices and has lower environmental impacts. If livestock farmers would be rewarded by retailers and consumers for higher environmental and animal welfare standards, the economic impact on the livestock sector could, to some extent, be mitigated.

download the report (PDF, 3 MB)
to the website "Task Force on Reactive Nitrogen"
Nitrogen on the table: the influence of food choices on nitrogen emissions and the European environment 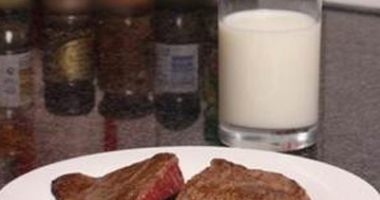