Large amounts of carbon (C) have been released into the atmosphere over the past centuries. Less than half of this C stays in the atmosphere. The remainder is taken up by the oceans and terrestrial ecosystems. Where does the C come from and where and when does this uptake occur? We address these questions by providing new estimates of regional land-use emissions and natural carbon fluxes for the 1700 - 2000 period, simultaneously considering multiple anthropogenic (e.g. land and energy demand) and biochemical factors in a geographically explicit manner.

Land use emissions are declining, but are still relevant

The observed historical atmospheric CO2 concentration profile for the 1700 to 2000 period has been reproduced well. The terrestrial natural biosphere has been a major carbon sink, due to changes in climate, atmospheric CO2, nitrogen and management. Due to land-use change large amounts of carbon have been emitted into the atmosphere. The net effect was an emission of 35 Pg C into the atmosphere for the 1700 to 2000 period. If land use had remained constant at its distribution in 1700, then the terrestrial C uptake would have increased by 142 Pg C. This overall difference of including or excluding land-use changes (i.e. 177 Pg C) comes to more than half of the historical fossil-fuel related emissions of 308 Pg C. 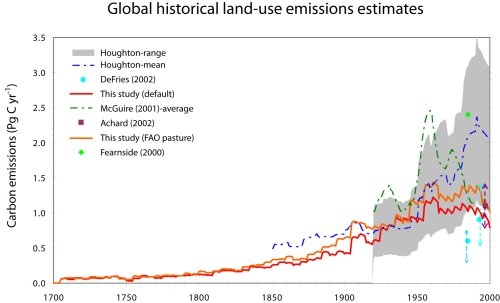 From source to sink and vice versa

Historically, global land-use emissions were predominantly caused by the expansion of cropland and pasture, while wood harvesting (for timber and fuel wood) only played a minor role. These findings are robust even when changing some of the important drivers like the extent of historical land-use changes. Under varying assumptions, land-use emissions over the past three centuries could have increased up to 20%, but remained significantly lower than from other sources. (note: the latest findings of the Global Carbon Project for 2008 report that LU emissions have dropped to a share of 12%.)

Combining the regional land-use and natural C fluxes, North America and Europe were net C sources before 1900, but turned into sinks during the twentieth century. Nowadays, these fluxes are a magnitude smaller than energy- and industry-related emissions. Tropical regions were C neutral prior to 1950, but then accelerated deforestation turned these regions into major C sources.

The energy- and industry-related emissions are currently increasing in many tropical regions, but are still less than the land-use emissions. Based on the presented relevance of the land-use and natural fluxes for the historical C cycle and the significance of fossil-fuel emissions nowadays, there is a need for an integrated approach for energy, nature and land use in evaluating possible climate change mitigation policies..