Recent research by the Netherlands Environmental Assessment Agency, in collaboration with the Joint Research Centre (JRC) of the EU in Ispra, showed that global emissions of the six Kyoto greenhouse gases increased by 75% between 1970 and 2004 to about 45,000 megaton CO2-equivalents. These trends were estimated using international statistics, amongst others from the International Energy Agency (IEA), and international emission reports.

In 2004, CO2 contributed 75% of global greenhouse gas emissions, methane (CH4) about 16%, nitrous oxide (N2O) about 9% and the combined F-gases about 1%. The largest sources were the sectors of energy (70%, mainly CO2 fossil fuel use), and agriculture and livestock breeding (14%, mainly CH4 and N2O, in comparable amounts). Electricity and heat production and road transport together accounted for about 55% of global total CO2 emissions from fuel combustion. 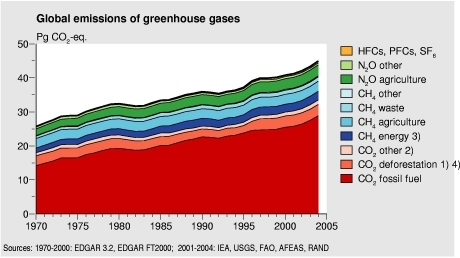 In the 1990-2004 period total global emissions of greenhouse gases by human activities increased by about 25%. Over the 1990-2004 period, total fossil fuel combustion emissions of CO2 increased about 28% world-wide (4% in industrialized countries, i.e. Annex I countries to the Kyoto Protocol, and 75% in other countries). Emissions from electricity and heat production and from road transport dominated global trends:

Satellite observations in the 1997-2002 period suggest that in CO2 emissions from large-scale biomass burning (deforestation) increased about 50% in the 1990s. Between 1990 and 2004, global CO2 from cement production increased by about 85%. Also nitrous oxide (N2O) from agriculture (12% increase) and methane from waste and wastewater (16% increase) contributed to the global emissions increase. Emissions of fluorinated substances (HFCs, PFCs and SF6) are now twice as high as in 1990.

Since 1990 global emissions of methane and nitrous oxide both increased by more than 10%. In the 1990s, emissions in developing countries increased about 20%, with the largest growth in Latin America and Asia, whereas emissions of OECD countries as a whole remained almost constant. The latter was due to, amongst other things, increased methane recovery from landfills and underground coal mines. In the 1990s, emissions in developing countries increased by 20%; in OECD countries, and in particular in Europe, N2O emissions decreased mainly due to emission abatement in the chemical industry and to a decrease in the use of nitrogen fertilisers. F-gas emissions as a whole increased 20% since 1995 (which is for most industrialized countries the base year for these substances). HFC emissions from the increase of HFC and HCFC use as substitute for CFC’s were partly offset by the moderate decrease in PFC and SF6 emissions.

Global emissions of the six Kyoto greenhouse gases increased by 75% between 1970 and 2004 to about 45,000 megaton CO2-equivalents. Global carbon dioxide emissions rose by approximately 90% during the same period, methane by some 40% and nitrous oxide by 50%. This can be explained by the increase of methane emissions from the use of fossil energy use (+85%), and particularly gas consumption, and from waste generation (+75%) (landfill sites and waste water). Emissions from agriculture have remained the same on balance. The increase in nitrous oxide emissions is the result of an increase in the use of synthetic fertilisers and manure and of an increase in livestock and arable farming.

The increase in carbon dioxide emissions since 1990 is more than twice as much as in previous years. However, the increases since 1990 as shown by emissions of CH4 and N2O are similar to those in previous decades. HFC emissions increased in the early ‘90s much faster than in other periods due the phase-out of CFCs and halons use as agreed upon in the Montreal Protocol and the partial replacement by HFCs. On balance, emissions of PFCs and SF6 did not change much since 1990.

The emissions of the greenhouse gases carbon dioxide, methane, nitrous oxide and of the fluorine-containing gases HFCs, PFCs and SF6 are covered by the UN Climate Convention (UNFCCC) and the Kyoto protocol. The objective is the reduction, between 2008 and 2012, of emissions of greenhouse gases by the industrialised countries that have signed the Kyoto Protocol, including countries in Eastern Europe and the former Soviet Union, to an average level of 5% below the 1990 level.

It is far from being the case that all countries report annually on their greenhouse gas emissions and the Kyoto Protocol imposes restrictions only on the emissions trend 1990-2008/2012 for the industrialised countries which are signatories to the Protocol. The USA and Australia did not ratify the protocol.

Carbon dioxide emissions from large-scale biomass burning are not estimates of the actual emissions, but do reflect the multiple year trends in deforestation as reported by the FAO. For the 1997-2002 period the estimate of the area annually deforested and burned was done using satellite observations (GFED dataset). When estimating non-CO2 emissions trends in the emission factors were taken into account when significant for determining the global trend.

The uncertainty in the emissions of most sources is large, except for CO2 from combustion where the uncertainty will be about 5% or less. For other sources, e.g. CO2 from the use of oil and gas as chemical feedstock, CO2 from deforestation, CH4 from fossil fuel production and rice cultivation and from waste and wastewater, N2O from agricultural activities and emissions from the use of fluorinated substances, the uncertainty can be much larger, in particular when making estimates at country level.