Navigate to main content Navigate to main menu
You are here
Home / Publications / Benchmarking eco-efficiency and footprints of Dutch agriculture in European context: implications for policies for climate and environment

Benchmarking eco-efficiency and footprints of Dutch agriculture in European context: implications for policies for climate and environment

This article benchmarks eco-efficiencies (defined as gross added value per unit of resource input or pollution) and environmental pressures (defined as resource use or emissions per unit of land or product) to test the hypothesis that agricultural production in the Netherlands is more sustainable than in other EU countries.

The eco-efficiency (gross value added per unit of resource input or pollution) of the Dutch agricultural sector is by far the highest in Europe and so is the resulting local environmental pressure per hectare.

The downside of the Netherlands being a large global exporter of agro-food products, therefore, is that this also causes a high pressure on the Dutch environment making it difficult to meet internationally agreed targets for climate and quality of air and water.

The relatively unfavourable greenhouse gas and nutrient footprints for dairy and arable production in the Netherlands are partly due to the use of large amounts of animal manure.

In contrast to more commonly held views, we conclude that relocating Dutch meat and dairy production to surrounding countries is not expected to cause a net increase in environmental emissions in the EU, while a reduction in Dutch animal production volume likely will decrease local environmental pressures.

A frequently heard point of view in Dutch society is that the country’s agro-food sector is a world leader in feeding the next generation of the global population, and that this sector can do so with ‘the least impact on the environment, climate and biodiversity, per kilogram of food, worldwide’.

The perceived high level of sustainability of the Dutch agro-food business is used as an argument against policy options that directly or indirectly aimed at reducing the volume of the agro-food sector, in order to meet current national targets for climate and the environment. It is argued that these policy options would cause a net increase in polluting emissions in the EU, due to the shifting of production volume from the Netherlands to other countries.

Publication title
Benchmarking eco-efficiency and footprints of Dutch agriculture in European context: implications for policies for climate and environment

Executive summary of nexus-relevant policies and recommendations for policy improvements 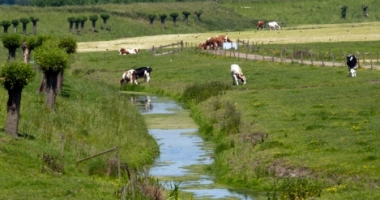