Global emissions of carbon dioxide (CO2) increased by 3% last year, reaching an all-time high of 34 billion tonnes in 2011. In China, average per capita CO2 emissions increased by 9% to 7.2 tonnes CO2. Taking into account an uncertainty margin of 10%, this is similar to per capita emissions in the European Union.

The fact that global emissions continued this historical growth trend in 2011 seems remarkable at first sight, considering that in many countries that belong to the Organisation for Economic Co-operation and Development (OECD), CO2 emissions in fact decreased – in the European Union by 3%, in the United States by 2% and in Japan by 2% – mainly due to weak economic conditions in many countries, mild winter weather in several countries and high oil prices. More important, however, is that CO2 emissions from OECD countries now account for only one third of global emissions – the same share as that of China and India, where emissions increased by 9% and 6%, respectively, in 2011. 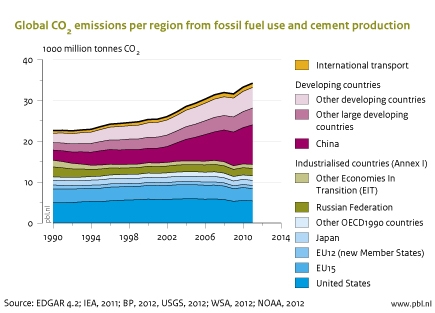 These preliminary estimates have been made by the PBL Netherlands Environmental Assessment Agency (PBL) and the European Commission’s Joint Research Centre (JRC) on the basis of energy consumption data for 2009 to 2011, which were recently published by energy company British Petrol (BP). The estimates are also based on production data for cement, lime, ammonia and steel, as well as on emissions per country, from 1970 to 2008, from version 4.2 of the Emission Database for Global Atmospheric Research (EDGAR), a joint project of JRC and PBL.

In 2011, China’s average per capita carbon dioxide (CO2) emissions increased by 9% to 7.2 tonnes CO2. Taking into account an uncertainty margin of 10%, this is similar to the per capita emissions in the European Union of 7.5 tonnes in 2011, the year in which the European Union saw a decrease in emissions of 3%. China, the world’s most populous country, is now well within the 6 to 19 tonnes/person range spanned by the major industrialised countries. In comparison, in 2011, the United States was still one of the largest emitters of CO2, with 17.3 tonnes in per capita emissions, after a steep decline mainly caused by the recession in 2008-2009, high oil prices compared to low fuel taxes and an increased share of natural gas. 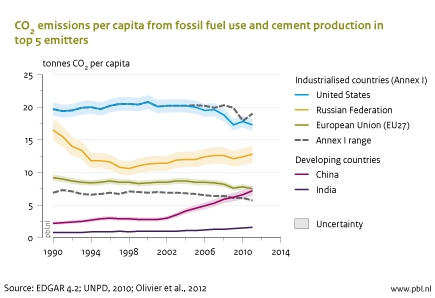 Levels of global CO2 emissions from flaring of unused gas during oil production, which have decreased by about 25% since 2003, did not significantly change in 2011. They roughly amount to the total of CO2 emissions in Spain. However, according to satellite observations, flaring emissions in the United States are on the rise, with a steep 50% increase in 2011. The main cause is the recent sharp increase in the country’s use of hydraulic fracturing, or fracking, for shale oil production and its ensuing flaring of co-produced gas. Recently, the United States also expanded shale gas fracking and has now become the largest natural gas producer in the world.

In the 20 years since 1992, when the United Nations (UN) Earth Summit was held in Rio de Janeiro, an increase of 50% in global anthropogenic CO2 emissions was observed. This growth in emissions caused an increase of 10% in the CO2 concentration in the atmosphere, from 356 to 392 parts per million (ppm). Since 2000, an estimated total of 420 billion tonnes CO2 was cumulatively emitted due to human activities (including deforestation). Scientific literature suggests that limiting average global temperature rise to two degrees Celsius above pre-industrial levels – the target internationally adopted in UN climate negotiations – is possible if cumulative emissions in the 2000–2050 period do not exceed 1,000 to 1,500 billion tonnes CO2. If the current global increase in CO2 emissions continues, cumulative emissions will surpass this total within the next two decades.

The share of renewable energy sources (excluding hydropower), such as solar and wind energy and biofuels, although still very small, is increasing with accelerated speed; it took 12 years, from 1992 to 2004, to double from a share of 0.5% to 1%, but only 6 more years to double again to 2.1% by 2011. This could represent about 0.8 billion tonnes in potentially avoided CO2 emissions in 2011 that would have been globally emitted from fossil-fuel power generation and road transport, which is similar to the current CO2 emissions in Germany. Including hydropower, renewable energy sources presently supply 8.5% of all the energy that is used, globally. The total in potentially avoided emissions in 2011 have been estimated at roughly 1.7 billion tonnes CO2 when including the hydropower capacity that was added from 1992 onwards.